Adrian Pop was born in 1951 in Cluj. After aquiering a solid basic knowledge in music from his father, Dorin Pop, outstading personality of the Romanian musical life as an eminent professor and choir conductor, he studied composition at the “Gh. Dima” Music Academy in Cluj between 1970 and 1976, with professors Sigismund Toduţă and Cornel Ţăranu.

A long term association bound him with the prestigious “Transilvania” State Philharmonic of Cluj, as an artistic advisor (1983 – 2004) and general director (1991 – 1995). Between 2008 and 2012 he has been Rector of the « Gheorghe Dima » Music Academy, where he is currently teaching composition.

An outstading personality of the Romanian musical life, Adrian Pop is the recipient of the Cultural Merit Ordre extended by the President of Romania (2008)  and of the « Ordre des Arts et des Lettres » conceded by the French Ministry of Culture (2012). 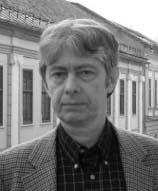