In Tranylvania the clocks do not measure time, but eternity, according to a Romanian saying. The Sighisoara fort ist the last existing inhabited fortification from the Middle Age in Europe. Embedded in the gently sloping hilly landscape of Transylvania, Sighisoara with its picturesque Old Town, its bumpy narrow alleys and colourful facades, gives the impression of a relic from past times. A touch of Romance and Adventure surrounds the ancient walls, thanks last of all, the fact that the notorious Count Dracula is said to have been born here. There is evidence of a settlement in the area already in the Bronze Age. The Dacians built fortifications here, the Romans founded a camp. In the Middle Ages the place rapidly developed into an important artisans' metropole and in 1367 it was given the status of a town. The economic rise of the guilds made possible the building up of an impressive set of fortifications consisting of a 930 metre long rampart, 5 bastions, as well as 14 towers, of which 9 are still standing. Sigisoara has been on the UNESCO list of World Heritage Sites since 1999. 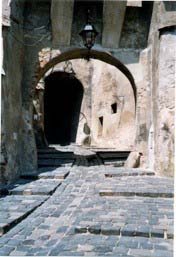