Doris Mende, born 1977 in Munich, already attracted attention in her youth winning numerous prizes at the German national competition Jugend musiziert" before she became a regular member of the German Youth Orchestra in 1995.

At the age of 16 she started studying oboe at the Hochschule für Musik und Theater München in the classes of Prof. Wangenheim and Prof. Passin finally as a student in Prof. Passin's master class. Intense courses with Albrecht Mayer, Hans-Jörg Schellenberger, Heinz Holliger, Christian Hommel and others complemented her studies.

Since the season 2011/2012 she is principle oboist of the Berner Symphonie Orchester. Besides her orchestra job she is an active chamber musician and appears as a soloist in numerous concert series, e.g. at Friedberger Musiksommer in 2010  together with Reinhold Friedrich and members of the Berliner Philharmoniker conducted by Karl-Heinz Steffens. 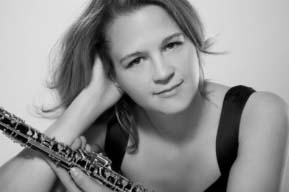