He studied at the Royal Conservatory of Music in Madrid with Rafael Ramos and Julia Urman. Later he moved to Germany, continuing his studies at the Musikhochschule Mannheim with Professor Reimund Korupp.

In 2011 he founded the Leonor String Quartet, recently awarded with the "Ojo Crítico" prize of RNE 2011. As a member of Leonor String Quartet Alvaro Huertas has study in the class of Melos Quartett in the Musikhochschule Stuttgart, and later at the Escuela Superior de Música Reina Sofia in Madrid with Rainer Schmidt.

Upcoming and recent activities include concerts throughout Europe. He has performed with artists like Maria Kliegel, Imre Rohmann, Peter Buck, Jose Luis Estellés, Daniel del Pino, Vlad Bogdanas, Andreu Riera, Albrecht Meyer, Berliner Philharmonic Wind Quintet, Enesco and Jade quartets or the choreographer George Momboye, among others. As a member of Leonor Quartet he collaborates permanently with Música Nova Chamber Group and since 2012 has its own concerts cycle at the National Museum of Decorative Arts of Spain (MNAD) in Madrid.

In 2005 he recorded with "Animato" label (Germany) a CD of octets by Mendelsshon and Schostakovich. Also he recorded cds with the chamber music works of Anton Garcia Abril and Ramón Paus for the labels Verso and Autor. His next recording with  Leonor quartet is a triple CD with the complete string quartets of the Spanish composer Ramón Barce that will be presented in spring 2012.

He is Director and Professor in the International Music Festival of San Esteban de Gormaz (Soria). He currently teaches at the Conservatory of Music "Victoria de los Angeles" in Madrid and is member of the Leonor Quartet. 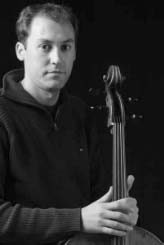