Founded in 2001, the Cuarteto Leonor received its main support and musical inspiration from the historic Melos Quartet, the group with which it completed post-graduate studies in the Musikhochsule Stuttgart before refining itself with musicians such as Rainer Schmidt and Imre Rohmann. From the beginning, this ensemble from Madrid has been developing a continuous concert presence in halls and festivals all over Europe, performing together with musicians like Maria Kliegel, Peter Buck, Tatjana Masurenko, David Pia, Daniel del Pino, José Luís Estellés, Wind Quintet from the Berlin Philharmonic, Enesco Quartet, etc. Throughout the years, it has closely worked with composers like Antón García Abril, Ramón Paus, Alejandro Román and Daniel Schnyder, some of whom have dedicated works to the Cuarteto Leonor.

Its artistic activities include a wide aesthetic diversity, ranging from the performance of classical and romantic repertoires to jazz (during this season, they will collaborate with the New York saxophone player and composer, Daniel Schnyder), collaborations with artists such as the choreographer from the Ivory Coast, George Momboye, and its interest and dedication to the release and dissemination of the Spanish quartet repertoire; a task for which it was awarded the “Premio Ojo Crítico 2011” granted by “Radio Nacional de España”.

Its last discographic work, a triple CD for the Verso label with all the string quartets of Ramón Barce (2012), received a spectacular welcome by specialized critics and during the 2013-2014 season, it intends to record for Sony Classics the six quartets of the composer from Castellón, Ramón Paus.

Other notable activities this season include performances in international festivals such as the Musikakademie Sighisoara (Romania), the Oberstdorfer Musiksommer (Germany), and in Spain its ongoing appearances as resident ensemble of the “Museo Nacional de Artes Decorativas de Madrid”, where it has its own concert series, and the Artistic Direction of the “Festival Internacional de Música Francisco Soto de Langa” in San Esteban de Gormaz (Soria), which in 2014 will celebrate its 15th edition.

The Cuarteto Leonor pays homage with its name to the writer Antonio Machado and the links they share to the province of Soria. 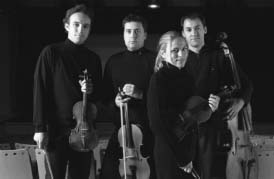